These sea salt flakes are crisp, clean-flavored, and light. The small pyramid-shaped salt is ideal as a finishing salt on all food, elevating each dish it touches with the taste of the cold northern waters of the Arctic. 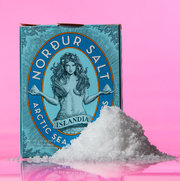 "A Finishing Salt From the North Atlantic" is how The NY Times described this unique salt in a recent feature. (image Tony Cenicola/The New York Times)